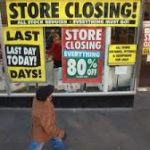 WHILE the 2016 holiday sales season was profitable for many independent retail stores, it was not as promising for some of the major chain stores who have announced below average earnings. The post holiday numbers are in and the retail industry as a whole had the largest increase in sales in the last five years. Consumers opened their wallets and made a record amount of purchases, but much of the retail money was spent online. The droves of shoppers did eventually turn up at the retail chains but they were driven by heavy discounts.

PROMOTIONS are great for shoppers but not so much for the store owners. While many small retailers held their own, the large chains felt the brunt of the challenges.

MACY’S has announced that it will be closing about 100 stores in 2017, which is roughly 15% of their locations. Along with those closings comes job losses which are expected to be as many as 10,000 workers nationwide. Sears has also announced the closure of many of their stores as well which will also result in many layoffs.

AMERICANS were in the mood to spend – just not at traditional stores. Independent retailers were quick to realize this and have been building, tweaking and improving their online presence to make sure they prosper for the new year. The challenge that all retailers have in this changing environment is to better define their place in the market and create experiences both on and away from the shoppers computer keyboards. Stores will need to become more of a destination or entertain customers in order to prosper. The retail store is not dead, but the retail store of the past is. It’s a far cry from the days of unlocking the front door and letting the line of shoppers inside!