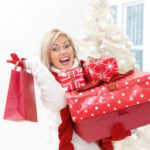 SHOPPERS are planning to put themselves at the top of their holiday shopping lists according to some new information just released. Many shoppers plan on having a more conservative budget this year with the average consumer planning to spend around $935.00 for the holiday season. Total spending includes gifts for others, self spending, food, flowers, decorations and greeting cards for the holidays. Last year spending was just slightly higher.

RETAILERS should be ready for a rush of shoppers in the weeks following the presidential election as they get more economic certainty and will start taking advantage of the promotions and deals. It is believed that once the election has passed shoppers will pull themselves out of the election doldrums and get into the holiday spirit.

FIFTY-eight percent of consumers plan to buy for themselves, with spending up 4% over last ear and marking the second highest level of personal spending in the last 13-years. Many shoppers are taking the “one for you, two for me” approach this year and retailers are preparing a vast array of merchandise and promotions of items that shoppers want to give as great gifts as well as buy for themselves. Make sure your store follows suit on this trend.

OVER 93% of those surveyed also stated that they would be taking advantage of free shipping and conveniences to buy online and pick up in store, as well as expedited shipping.

CLOSE to half of those surveyed will be tackling their holiday shopping early again this year, many having already started in October. The same percentage said they would start in November and 18% are waiting until December. Millennials seem to be waiting the longest to wait out for the best deals by retailers, with over half of the group waiting closer to the holidays to start shopping.

THE hottest items this year: Gift cards at 61% followed by clothing and accessories at 54% and then books, CDs, DVDs or Videos at 40%.

Retailers Forum Magazine is the perfect place to find wholesale merchandise for your store or online business. Join us monthly and view each month’s new issue.