How many times have we heard politicians promising to bring back manufacturing jobs to the United States? Maybe I am over thinking it, but unless you are manufacturing some very expensive items it will be a challenge to offer American workers minimum wage to stand on an assembly line and put together key-chains and such. Come to think of it, there are some very expensive items like all of Apple’s products that have low material cost and sell for hundreds or thousands of dollars. Those components would be great to manufacture in America and pay workers a decent wage. But, wait, why manufacture here when they can pay a couple of hundred dollars a month to do it overseas? And so the problem continues.

As sales director for Union store fixture and mill work installations I understand now more than ever how important labor unions are to our work force. With many Americans working harder than ever we see many corporations cutting shifts to less than 30-hours so they are not eligible for health benefits. We are becoming a country of part time workers, which is not going to sustain us to raise families and live the American dream.

Thanks to Labor Unions like the International Brotherhood of Carpenters, which we are members of, there are some safeguards for us. An honest wage for a day’s work by skilled workers who are well- trained and focused on quality and safety.

We often sit around and discuss the future of our children and the new generation when it comes to what types of jobs will be available to them. Tech comes up a lot. It’s a growth industry, not only in the USA but overseas as well. With the world becoming smaller (thanks to the internet) it also becomes more competitive and price conscious.

Many manufacturing jobs have been replaced by computers and robots. A bottling plant for a beverage company can replace 100 human workers with a series of robotic stations and only 2 human workers to turn them on and off. More people unemployed by technology. Many young college graduates have studied robotics in the hopes to build a career in that field. Now, here is the kicker (and It is real)… There are companies that are actually designing robots capable of building robots!

Now let’s get onto construction! We as union carpenters, while more states embrace “right to work” are still feeling secure that a man with tools will always have a job. Well, I felt the same way until I researched the robotics industry and found a startling new concept: Robotic construction workers!

Yes, it’s true, according to Science Journal, a prototype of a new robot referred to as “termes” has been developed that may one day revolutionize the construction industry. Engineers provided the robots with construction blueprints, and then left them alone. The TERMES built the structures by observing and reacting to the other robots around them—with no further instruction from humans.

Because they work independently, the same construction plan can be executed by a dozen TERMES or a hundred of them. Because their directives are so simple—put down a brick that fits in the building plan, where no one else has laid one down–they require little processing power. The prototype TERMES use specially built bricks to construct towers, castles, and pyramids. The researchers say they could also handle simple tasks like laying sandbags down before floods. While the prototype robots are about the size of a desk phone, researchers say they could eventually scale them up or down 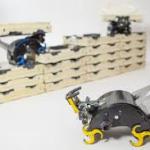 replaced by robotics. Carpenters and construction workers can be displaced by the robots and the sites requiring only minimum supervision.

While this technology is still in prototype, the reality is that they have successfully created the beginning stages of its development. While those of us middle-aged carpenters may not have to contend with R2D2 taking over our jobs, future generations may very well have to deal with this new technology that will threaten their livelihood.

My advice to those up-and-comers in the industry….become a shop steward so you can watch over the robot workers!

There is an interesting video put out by Harvard that shows these Termes in action: http://youtu.be/LFwk303p0zY

Martin Chase is National Sales Director at Store Force, Inc., leading Union store fixture installers providing clients with fixture and mill work installations around the country. Martin can be reached at 631-672-3150 or by email at: unioninstallers@gmail.com