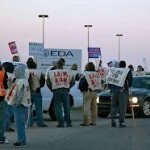 Look, I am an Apple fan – I really do like my iPhone and have stuck with the “4” for a couple of years. What I do have some issues with is the company itself and the fact that over the years we have read much about the mistreatment of workers at their Foxconn plant in China.

We reported over a year ago about worker suicides at the plant because of poor conditions and treatment of the workers. Underpaid and overworked was the theme and Apple promised to do something about it – and they did by increasing salaries for the workers which were higher than other Chinese factories. It still begs the point that while they threw a few dollars at the workers to slightly increase their pay the monotony of the job still at low pay was an issue.

But things quieted down as we figured it would – Apple has a way to seemingly control their bad press. Until recently when because of high demand for the new iPhone the workers were pushed to their limits of production and riots ensued at the Foxconn factory. Last week it was also reported that some laborers being used to assemble iPhones were as young as 14-years-old. What child labor laws?

Well, here is the issue that I have that may spark some commentary. Apple is not the only company outsourcing so they can make their products as cheaply as possible and sell it for as much as possible. What do you think it costs over in China to make our $600 iPhone? The margins on these electronics is incredible and THESE are the types of manufacturing jobs that should be brought back to the USA. Not assembling dollar store merchandise that NEEDS to be made super cheaply – but items like what Apple sells and what Coach handbags sells. I read today that Coach is considering moving their operations out of China because the wages are too high! The average factory worker makes less than $200 a MONTH! A typical Coach Handbag can sell for $1500 or more. How many handbags can a laborer make in an entire month?

GREED is what it is all about. How come when the politicians are squawking about outsourcing and how America’s losing jobs they are not citing companies like Apple or Coach or the others who profit by selling millions of dollars of goods to good old Americans. These high end brands can more readily afford to move jobs back to the USA because they have the margins. It really just comes around to making money- and as much of it as possible. I have nothing against making money and understand the buy low, sell high theory. It annoys me when both Presidential candidates bandy about bringing home the jobs from overseas and do not cite anything specific.

Obviously Americans are not going to work for $50 a week in a factory – but there was a time pre-China, pre-Vietnam and pre-Indonesia where American factories did hire Americans and paid a fair wage for their services. Outsourcing is not going away and until we figure out what kind of jobs should return to America it’s a great deal of rhetoric.